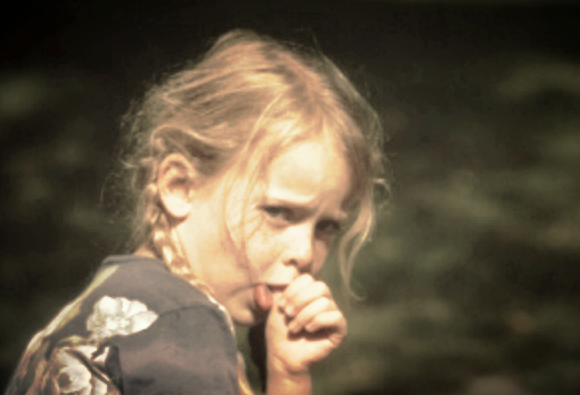 (isn’t me, but looks like me as a kid, while sucking my thumb)

This post isn’t very AMWF related, but I’ll post it anyways because why the hell not. And it involves Lin some as he is a part of my life these days.

Lately I tend to enjoy writing self-deprecating concessions more than anything else.

I sucked my thumb until the age of seven (possibly eight?).

I would frequently ask my teacher to be excused to visit the restroom and then hide out in a stall and suck my thumb with an index finger hooked over my nose… pure suckling heaven.

After a while the teacher would come looking for me and I’d whine and say, “I can’t poop!” And so I feigned having bowel troubles halfway through grade school. It seemed less embarrassing than being known as a thumbsucker, at the time.

I was also a chronic masturbator, starting at around age four or five due basic plumbing; the bathtub faucet. Later I would employ the aid of Marvel and Archie comic books. Especially Spider-man… who happens to be Korean, I hear. I try not to recall my earlier sexual fantasies as they were borderline psychotic, but my long term memory is like that of a friggin elephant, unfortunately.

So, thought I’d take a break to write a bit.

Around two months ago, my grandmother, Hazel, passed away during the night.

Melatonin, a bottle of dry Riesling and 3-4 shots of bourbon wouldn’t slow my thoughts at all and I ended up staying up all night watching The Curious Tale of Benjamin Buttons over and over again until the sun crept up from behind the foggy mountains.

Hazel looked a lot like Kiera Knightly when she was younger. Relatives and neighbors would often go on and on about her beauty as though it had been her most redeemable quality. And I think that’s horribly sad.

I’d rather be homely and free than a beautiful hostage.

She was basically held captive for sixty years by a strikingly handsome man, my grandfather, Tennessee River. (actual name)

I would often see him chopping wood out back or performing some other manly duty. His brows were always furrowed intently, his broad shoulders and muscled back bulging under a T-shirt with his long legs stomping around in dark denim jeans, in much of a 50s or typical Rockabilly style.

To me it seemed barbaric instead of appealing. My grandmother told me, “He was the most handsome man I’d ever seen, and still is. But if only I knew then what I know now… I’d have run the opposite direction.”

He was constantly barking demands and random insults at her as she scurried about the kitchen cooking dinner precisely to his liking. She tried several times to start her own fashion business but he sabotaged her efforts every time. She left him more than 20 times and he always found her and forced her home. That was fairly common back then.

It reminds me of Stokholm syndrome, Beauty and the Handsome Beast. He also had OCD and washed his hands constantly. Anything soiled or stained was “filthy” and “vile” as though the dirty objects were committing some hideous sin.

During the last two days of Hazel’s life I sat beside her bed and played music she enjoyed; Fly Me to the Moon by Frank Sinatra, Que Sera Sera by Doris Day, Gabriel’s Oboe by Ennio Morricone, among others. Her eyes continued to glaze over and held a dreamy gaze, as though they were following with the music out of our realm, through her bedroom window and somewhere past the Smoky Mountains.

I wished that I had some divine power that could return her to her youthful self so that she could grab that lost chance to enjoy a happier life.

Lin seems so light sometimes, compared to me. His warmth and lightness of being is calming.

Just before driving to Knoxville, a few months ago, he stopped by unexpectedly. I think it was a test. He wanted to see if I would create another excuse not to see him.

For me, it’s very easy to reject a handsome guy who’s overly sure of himself or aggressive in any way. It sparks a hidden firestorm of resentment going back generations. Retribution for Hazel, for all the Hazels… For that kind of man I have nothing to offer.
Not anymore.

But Lin seems to be very humble and warm, so far.

He was incredibly patient and kind for weeks and weeks, knowing that I’m… sad and feeling displaced, even though he doesn’t really understand why. Our lives have been very different but he’s incredibly astute, intuitive and disarming in his own way.

At the end of the night he sensed that I was growing anxious, not wanting him to leave… but worried about the alternative, so he called it.

He said, “Dear, I can tell you want me to stay, however… you also want me to leave. And that’s okay.”

So, of course, I couldn’t let him go.

Perhaps I’ll write more explicitly later but for now I prefer to be like this.

At any rate… I hope you guys are enjoying your December and holiday or anti-holiday season.